The Economic Damage of Political Instability in the United States

The current levels of inequality is the United States created a less stable economy that has struggled to recover from a debt driven financial crisis in 2008. Fed Governor Sarah Bloom Raskin gave a speech at the 22nd Annual Hyman P. Minsky Conference on the State of the U.S. and World Economies in April that strikes at the heart of how inequality has weakened the economy. Member of the middle class and below had the majority of their wealth tied up in home equity that was destroyed by the collapse of the housing bubble. The past five years has been a painful period of deleveraging (see chart) as many families were stuck with unrealistic mortgages as a result of irrational exuberance in the housing market. Families most damaged by the housing collapse were also the ones most vulnerable to the increase in unemployment. The wealthiest members of society have fared well since the financial crisis while others are still struggling to regain financial stability.

The result of the dramatic disparities in economic circumstances for the different income classes since 2008 has lead to a disturbing increase in political polarization. Below is the Political Polarization Index developed in a study by Marina Azzimonti at the Philadelphia Fed. Polarization has been trending sharply upward since 2008 and reach its highest level at any point from 1981-present during the 2012 election. To a large degree, the political polarization of the country has been driven by inequality and the result of the 2008 financial crisis. Republicans are sternly on the side of low taxes and reduced welfare benefits, which is supported by many extremely wealthy donors and social conservatives. Democrats have been advocating increased taxation of the rich and financial relief for those hit hardest by the financial crisis. The two sides of the wealth spectrum have been placed on opposite ends of the wealth spectrum, and the result has been a contentious partisan environment. 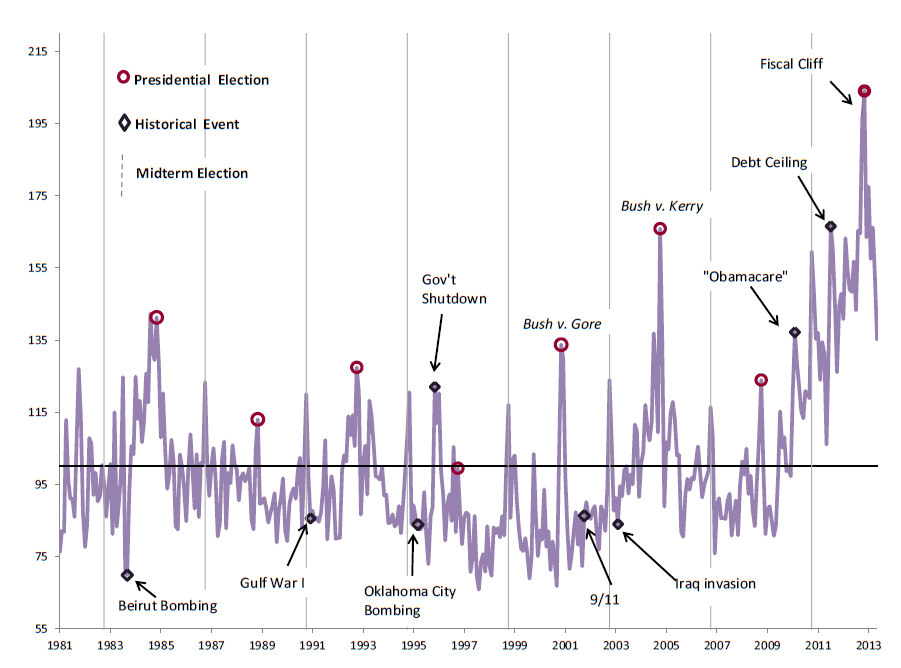 The polarized political environment has done far more than slow down the legislative branch and inspire hateful debates in the last election cycle. It has created sub-optimal policy initiatives that are actively harming economic growth in both the short and long-term. Political polarization has created instability in the legislative process that has damaged fiscal policy in the U.S. Sequestration was intended as a bitter pill to end debt ceiling squabbles that Republicans have been all too eager to swallow. In reality, Sequestration is a temporary band-aid that serves very little purpose in the long-term debt ceiling or budget battles but causes very real damage to portion of society that have been hurt the most by the financial crisis. Long-term unemployment is still a pressing issue for legislators who are barely able to keep the government operational. The future growth path of the economy gets bleaker every day as long-term unemployment remains an issue that politicians are content to stash on their shelves until it becomes politically useful during 2014 or 2016.

Political instability even shares part of the blame for the botched implementation of Obamacare. The Obama administration has been forced to expand the scope of the federal exchange due to state-level intransigence and even the development of the project was damaged by party politics. The administration felt the need to be secretive and insular during the development of the federal exchange because of constant attacks from the right. Now the country gets to wait with bated breath for another doomsday deadline to see if the exchange can be fixed in time to avoid extensive damage to insurance markets. Politics is not an excuse for the mismanagement of the launch, but it is still a reality of the situation.

There is a long strand of literature in academic economic journals discussing the theory of how economic growth might be damaged by inequality and political instability. Lucky for us, we get to see the dirty details of it firsthand.
Posted by Unknown at 10:31 AM